NetSurf is a free, open source web browser. It is written in C and released under the GNU Public Licence version 2. NetSurf has its own layout and rendering engine entirely written from scratch. It is small and capable of handling many of the web standards in use today.

The NetSurf project's goals and aims are:

Have fun
NetSurf is developed in people's spare time, so our main goal is to have fun – hopefully learning something and creating a product that people find useful along the way. If you want to join in, check out the developer and contributor area!
Adhere to the standards
There are many web standards. HTTP, HTML and CSS are just a few of them, and new specifications appearing all the time. The NetSurf team is devoted to implementing these standards.
Superior user experience
We want NetSurf to provide a consistent interface to the user that fits right in with your desktop environment. We aim to make NetSurf's interface clean and simple while providing access to powerful functionality.
Keep NetSurf small
NetSurf is a web browser with a small footprint, and we want to keep it that way.
Portability
We want NetSurf to be available to as many users as possible. We've already seen ports to handheld devices and would like to help anyone attempting a new port.
Modularity
Many of of the components designed for NetSurf are available separately, so that others might use them in their own projects.

The NetSurf project was started in April 2002 in response to a discussion of the deficiencies of the RISC OS browsers that were available at the time. NetSurf has been developed continuously ever since. The latest features and bug fixes have always been available immediately to users through the project's autobuilder. NetSurf had become the most widely used browser on RISC OS well before NetSurf's first release, version 1.0, on 17th May 2007. Development builds have continued to be more widely used than release versions by RISC OS users. 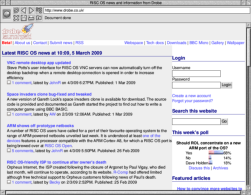 An old version from April 2004 displaying the Drobe web site in March 2009.

A GTK port was started in June 2004, which runs on Unix-like platforms. Initially this port was created in order to aid the development and testing of the RISC OS version. Over time, the GTK port has become a fully fledged part of the project and cemented NetSurf's commitment to portability.

NetSurf has now been ported to many more platforms with native front ends being created for BeOS & Haiku, as well as AmigaOS 4. A dumb framebuffer port also exists, which has no particular operating system or GUI toolkit requirements.

Some of the major events and changes in the project's history are chronicled below.

This section explains the various NetSurf front ends and should cover whether NetSurf is available for your system. NetSurf currently has seven different front ends. These are for RISC OS, GTK, BeOS, AmigaOS, Atari, Mac OS X and dumb framebuffers.

NetSurf's GTK front end works on Unix-like systems, including Linux, FreeBSD, NetBSD, Solaris and others. There are no native Windows or MacOS X ports of NetSurf at the moment, however the GTK front end can be built for those platforms. The GTK front end is available from the package repositories of many Linux distributions including Debian and Ubuntu.

Users can run our release versions of NetSurf, or they can run development versions. Our release versions are tested and released when we are happy with them. Development versions are snapshots of the current state of the code, as the developers are working on it. These versions may have newer features or bug fixes that haven't made it into a release yet, however (depending on what the developers are doing) they might also have new bugs, instability, or they may produce reams of debugging output.

We recommend users use the release versions, unless they particularly want to help us by reporting issues with development versions. People building NetSurf from source are encouraged to build the current HEAD, rather than a release, as it is most up-to-date and has features that may not yet have been released.

Since NetSurf started out on RISC OS hardware, which is not particularly fast – the most widely used RISC OS hardware is a 200 MHz StrongARM RiscPC – so it runs well on resource constrained hardware such as handhelds. Even on fast modern desktops, users benefit from NetSurf's efficiency through its fast startup time and lightweight approach. 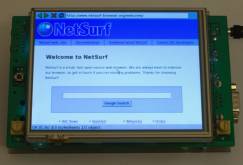 The image above shows NetSurf's framebuffer front end running on top of a Simtec DePicture's bootloader! It's using an ARM9-based Samsung S3C2440 CPU running at 400 MHz.

People also use NetSurf on other handheld gadgets, such as the Openmoko mobile phone and the Nokia N810 internet tablet. NetSurf's full page scaling abilities help it to make the best use of a small screen.

The NetSurf project needs help and input if it is to keep moving forward. There are many ways for users to contribute to the NetSurf project. One of the simplest is to try the latest development build regularly. If you find any bugs, features you like or changes you don't like you can give feedback to the developers. It is this valuable feedback that helps shape NetSurf into a program people enjoy using.